Pop star Billie Eilish has been “cancelled” because of her “big boobs” after her fans got angry over the musicians recent style change.

When Billie Eilish first appeared on the music scene, she had a very distinct look: a sort of skater-goth look with oversized sweatshirts and baggy pants. Fans seemed to fall in love with her for shunning so-called “beauty standards.”

Elle Magazine reports: “Many of her fans were deeply attached to her signature oversize-streetwear, skater-goth aesthetic, which some saw as a refusal to be sexualized. So when she started experimenting with new looks, occasionally stepping out in more form-fitting clothes, the reaction from certain fans was swift—and vicious.”

During a recent appearance at the Met Gala, Billie decided to switch it up, dressing in a ball gown with platinum blonde hair reminiscent of Hollywood icon Marilyn Monroe.

Speaking with Elle Magazine, Billie revealed that many of her fans were angry at her over her new look.

“People hold on to these memories and have an attachment. But it’s very dehumanizing,” she said. “I lost 100,000 followers, just because of the boobs. People are scared of big boobs.”

In another recent post to her Instagram, Billie showed off in a Miaou tomato-print corset with a lace bra peeking out, and her fans were not happy.

Some trolls commented on the post, calling it “disingenuous” and “cringy asf,” while another commented, “The industry really changed you huh smh.” 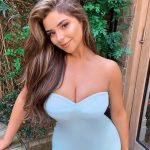