The Red Hypergiant Star VY Canis Majoris, about 3,800 to 5,000 light-years from our solar system is…. breathing. No, we’re being totally serious. It’s an absolutely enormous star, and when we say it’s breathing… it’s breathing it’s dying breaths.

VY Canis Majoris is estimated to be somewhere 1,800 and 2,100 solar masses in size, making it one of the largest stars known in the milky way galaxy.

However, astronomers believe that it has aged beyond the “main sequence” of stellar life and has begun to die with a truly epic amount of its mass already blasted away by its own solar wind sending plumes of stellar matter into its’ system. 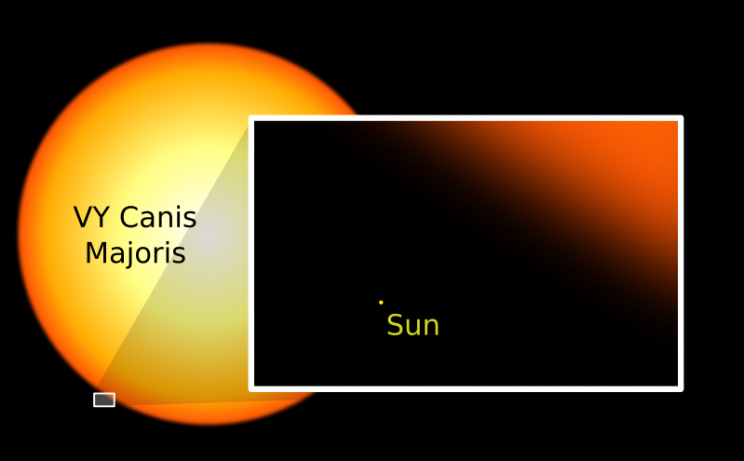 Fun fact: If we had VY Canis Majoris for a Sun, it would extend for hundreds of millions of miles further than our Sun, consuming Mercury, Venus, Earth, Mars, and the Asteroid belt perhaps even extending beyond the orbits of Jupiter and Saturn.

How Can A Star Be ‘Breathing’?

According to Interesting Engineering, the star is what’s known as a “pulsating variable” star with a luminosity (brightness) that changes from bright to dim and back again and again. With each pulsation, the solar winds the star can no longer contain because of its’ gradual weakening and expansion throw off more of the star’s mass making it appear brighter until the effect wears off and the cycle starts again with VY Canis Majoris losing more and more mass each time.

“Once it finally runs out of fuel in its core, the star will significantly compress and become a core-collapse supernova (by some estimates, it might even spawn a hypernova. which can generate 100,000 times more energy than a typical supernova, not to mention its powerful expulsion of gamma-ray bursts) This is where the central region of the star becomes a neutron star or black hole, and the outer regions of gas are ejected into space — forming a supernova remnant. For a few weeks or months, the wreckage of the explosion will outshine the rest of the galaxy, and be easily visible from here on Earth during the daytime.”

Luckily, the Earth wouldn’t be in any danger from the massive explosion given the distance, but it will make for one hell of a light show for our descendants.