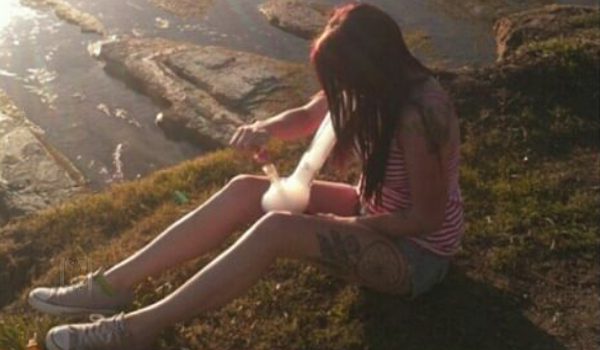 Amanda likes to hang out around Boston and works as a healthcare professional. She’s not a hardcore stoner, claiming that she only tokes to “help her sleep and eat better.” It didn’t take long to discover that along with being relaxed and getting the munchies, pot has another interesting side effect. “I am definitely hornier if I smoke or if I take an edible. It really makes my sex drive better.”

Now that pot is legal in more places, stoner girls are coming out of the woodwork to consume cannabis like never before. One of the reasons, Amanda explained on a local podcast, is because “women experience this drug differently than men.”

Once they learn the “lesser-known use of cannabis,” a female aphrodisiac, they never look back. Becky Lynn, director of the Center for Sexual Health at Saint Louis University, agrees. She treats “women with problems ranging from low libido to painful sex to difficulty with orgasm.” She does it by encouraging them to use cannabis.

Women of all ages and walks of life visit her clinic and confirm, they tried it and liked it. “They would come to me and they would say, ‘Well, you know, if I smoke marijuana or use marijuana, then I can have an orgasm or my libido’s better.‘”

They’re on the way to full fledged stoner status now. Since Becky couldn’t find much research available, she “decided to conduct her own study.”

Along with fellow researchers in a “university practice that treats women for all kinds of reasons,” she took a confidential survey of 300 female patients. Stoner girls have great sex.

“What we found was that the majority of women noted that [marijuana products] did improve the overall sexual experience. It did improve libido, it lessened pain, it improved their orgasm.” To find out why, Dr. Lynn consulted Rebecca Craft, a professor of psychology at Washington State University.

Professor Craft doesn’t work directly with humans but she studies stoner mice. Her specialty is the effects of drugs on behavior. When it comes to THC, the dominant psychoactive compound in cannabis, “female rodents experienced about a 25 percent increase in sensitivity to the pain-relieving effects.”

Not all the time though, only “during ovulation, when their estrogen levels were rising.” As estrogen levels drop and progesterone levels rise, “their sensitivity to THC dropped and became similar to that of male rodents.”

The professor points out that mice aren’t humans so it’s not fair to make broad generalizations but it’s “well established” that stoner girls “experience a heightened sensitivity to pleasurable stimuli during ovulation as well.” That means be extra careful, protection wise.

“I would say definitely when [estrogen is] really peaking during ovulation, for example, there’s more dopamine activity in that pathway, and this makes females more sensitive to all types of rewarding stimuli, including food, drugs, and sex.” That’s probably a hard wired survival trait. “Presumably it evolved to make us more amenable to social interaction when we’re most likely to be able to become pregnant.”

Personally, Lynn thinks “the link between weed and increased female sex drive has to do with three things THC does to the mind and body.” This stoner girl is not interested in starting a family yet. That doesn’t mean she doesn’t mind practicing.

Grass “reduces your anxiety, so you might feel more comfortable, and it slows down the perception of time and causes heightened sensations.” Guys love to hear that. Especially when she adds, “So whatever touch you’re feeling seems bigger in your mind.“

Mark Megahan is a resident of Morristown, Arizona and aficionado of the finer things in life.