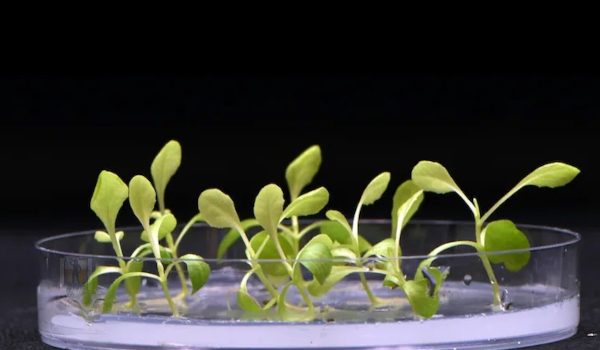 You can forget everything you learned in biology class. Perfectly healthy plants can grow in complete and total darkness. How does that old saying go? “Better living through chemistry.” This might be the ticket to space the human race has been searching for.

All of us have been taught since we were kiddies that plants convert carbon dioxide from the air into nutrients the plant needs. It’s called “photosynthesis.”

Mankind has been relying on vegetation for food through eternity and all along it’s been taken for granted that without enough sun, any plant will die.

It’s not easy to run a farm in the middle of Manhattan. Urban areas are where all the people are but all the real estate is indoors with no sunlight.

A garden on every roof would be great but still not enough to meet the needs. You can grow plants under lights but that’s energy intensive. When we try to set up camp on the Moon it’s going to be even trickier.

Lack of sunlight is a huge hurdle to off planet food supplies. Either the plants needed to be re-engineered or the process.

Thanks to a team of researchers from University of California, Riverside and the University of Delaware, we’re a quantum leap closer to solving the problem. Their findings were published June 23, in Nature Food.

The researchers found a way to zap carbon dioxide and water with electricity to make “acetate.” That happens to be “an alternative chemical that plants can consume to grow instead of glucose.”

Just about everything they tested “grew entirely in the dark.” There was an extra added bonus, too. They found their method “was up to 18 times more efficient than the normal photosynthesis process.”

According to Robert Jinkerson, a UC Riverside assistant professor of chemical and environmental engineering and co-author, they “sought to identify a new way of producing food that could break through the limits normally imposed by biological photosynthesis.”

The key to growth in their plants is “a carbon dioxide electrolyzer.” They add the acetate to the hydroponics solution.

“In all, the process was used on nine plants including lettuce, rice, green pea, tomatoes, and jalapeño peppers.” They also had great success with yeast, green algae, and mushroom-producing fungus.

The results they said, were stunning. The algae they grew turned out “roughly four times more energy efficient than the solar photosynthesis method.”

Mark Megahan is a resident of Morristown, Arizona and aficionado of the finer things in life.