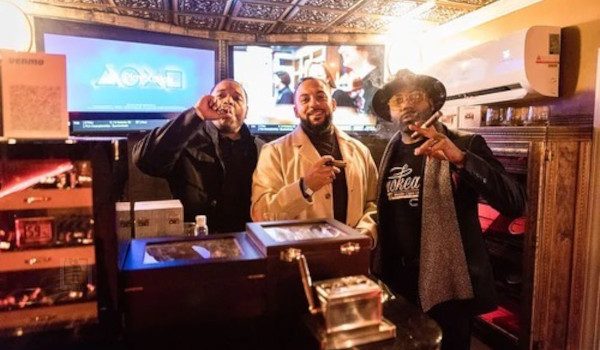 After an August vote of the Louisville City Council upheld the 2008 ban on indoor smoking that in a single stroke wiped out every Cigar Bar and Lounge in the home of the Kentucky Derby many hung their heads and mourned the loss, others looked for another way. And you can’t stop the American entrepreneur much less four of them. Indoor smoking is illegal in Louisville and it appears it’s going to stay that way for some time, but Co-owners Terrence Johnson, Mark Miller, Maurice Blakemore, and Michael Moss Jr. worked out the particulars of a beautiful ‘work-around’.

It is available for rent for private corporate events, weddings, parties, birthday celebrations, and other social gatherings.”

The Smokeasy Lounge’s wordplay name derives from and hearkens to another episode in Bourbon Country’s history that saw government with the “best intentions” impose its will upon Louisville establishments and citizens: Prohibition and the age of the speakeasy.

“I came up with the name Smokeasy because I wanted to honor the spirit of speakeasies. Being prohibited from drinking, people found a way,” Johnson said. “There is a niche market of individuals who love to enjoy a good cigar with a bourbon or some other drink — Smokeasy is for them.”

Keeping The Bourbon and Cigar In The Black Business Community

Johnson’s Cigar lounge journey started with him patronizing the various establishments of Charlotte, NC in his previous work as a Vice-President with PNC Bank. He had found that the lounges provided an ideal setting for business meetings with like-minded professionals. It’s an experience he found sorely lacking upon his return to Louisville.

Where a weak businessman sees adversity, great businessmen find opportunity, and Johnson and his team must’ve understood early on that the business that could work within the law but provide the experience their clients were looking for would succeed. He brought his idea to Mark Miller, a bourbon enthusiast (can relate), and the two refined the idea: Smokeasy was born.

About $30,000 later with tag-teams with other local black-owned businesses and Smokeasy was ready to roll.

The Mobile Cigar Lounge offers a membership system for Cigar enthusiasts and a number of different packages for event venues. According to Johnson, the most popular setup is $500 for two hours and $150 for each additional hour onsite. Their cigar stock ranges from the more approachable $8 up to $25 a stick.

Some of their bestsellers are Drew Estates Blondie and Escobar Cigars, the very same that are co-owned by musician Nasir “Nas” Jones.

“Another minority owned cigar companies called Fratello, they send us quite a bit as well,” Johnson added. “And then, you know we have we have a local gentleman. His name is Gary Lōks and he makes his own cigars.”

Alec Bradley Cigars has even partnered with Smokeasy to produce its own cigar line of Maduro in Connecticut broadleaf wrappers with the Smokeasy logo.

The membership program for Cigar lovers is $40 per month and entitles the holder to their own “membership card, an introductory cigar, a Glencairn or bourbon member glass, two cigars per month, a discount on in-lounge purchases, and prioritized access at the lounge during public events.” according to bizjournals.